Freedom of speech is not only a human right, it’s an essential part of democracy. The right to voice our opinions and have access to unbiased information, gives us the opportunity to hold leaders and institutions accountable, strengthening societies and fostering social cohesion. Every year on May 3, we celebrate World Press Freedom Day, commemorating the right to freedom of expression through any type of media, defending journalists from attacks on their independence. As we have witnessed working in vulnerable contexts around the world, ethical and independent journalism has the power to tackle exclusion, help prevent violence and contribute to foster and enable peace.

Therefore, in addition to informing people, journalism can shape and spread values, defuse tensions, and counter hate-speech, providing an array of different views and opinions. Through its capacity to investigate, journalism can help people question established ideas and reflect on pressing issues. On the other hand, the way certain information is distributed can also contribute to escalate conflict, providing information that is manipulated by those in power, and instead of revealing the truth, is used for propaganda purposes. In this sense, journalism and mass media greatly shape and impact societies – playing a key role in positive social and political transformations around the world, but also fueling negative stigmas and stereotypes, which contribute to cycles of violence and conflict.

If we understand peace as a process to transform conflict, we must consider that this is not possible without access to independent information. Therefore, much interest has been placed on the challenges journalists are faced with in violent and conflict driven regions, and the role they can play to build and sustain peace. UNESCO sees the rights of press freedom and freedom of information as a crucial foundation of democracy, dialogue and development. Moreover, considers these rights as preconditions to protect and promote all other human rights. Accuracy, independence, objectivity and accountability are amongst the most important principles of responsible journalism. Consequently, journalists must be rigorous in their duty to provide all relevant facts, assuring that their voice does not tailor to the special interests and needs of corporate and political leaders, and consciously portray the context of every story. If the practice of journalism does not adhere to these principles, it may risk depicting only one side of the story and may fail to convey an honest narrative that acknowledges the complex and numerous social, economic, cultural and political factors that contribute to conflict, and therefore may contribute to criminalize and stigmatize the most vulnerable groups.

With over 20 years of experience working to build peace around the world, Interpeace has recognized the power of journalism and media to rebuild bonds of trust and mutual understanding in vulnerable contexts, as it has helped to dismantle prejudice, through knowledge. If journalists adhere to strict codes of conduct, the possibility to generate positive transformations in societies is immensurable.

The role of journalism in preventing violence

Journalism that contributes to peace, focuses on trying to humanize all victims of a conflict, seeking to uncover the complexities behind violent driven situations. In this sense, journalists do not exploit suffering and loss, they seek to convey a balanced account of the information. In Central America, there has been a rise in the development of independent, digital newspapers that are helping citizens hold political leaders accountable, contributing to raise awareness on sensitive and complex realities in the region. Nonetheless, the way that certain social phenomena has been explained in traditional mass media has in some cases, contributed to exacerbate social conflicts. Explaining violence in a simplistic way, constantly generalizing, without truly conveying the full picture, has impacted at-risk youth, who already suffer from marginalization and exclusion.

In 2011, within the framework of the International Conference to Support the Central American Security Strategy, promoted by the Central American Integration System (SICA), the first regional media forum on “Mass Media, Democratic Security and Violence Prevention,” took place in Guatemala, jointly organized by Interpeace’s Regional Office for Latin America. Journalists representing each country in Central America had the unique opportunity to have a dialogue with representatives of civil society. Through an open discussion, they were able to reflect on the influence that mass media has in defining and portraying violence in the region, and the impact journalism has in constructing people’s perceptions of reality.

As a follow up in 2013, Interpeace, the Central American Program for the Control of Small Arms and Light Weapons (CASAC / SG-SICA), the digital newspaper Plaza Pública and the Austrian Development Cooperation (CAD), organized a regional workshop called “The role of Journalism in the Prevention of Violence.” Through this workshop, journalists, representatives of civil society, government and the international community, jointly developed a strategic agenda to help foster the practice of journalism to promote peace in the region. Emphasizing how journalism can help break social stigmas and misconceptions, by conveying stories that are sensitive to the pain of the victims, sensitive to the human rights of perpetrators and knowledgeable of the profound impact their words and statements have on the population. In Honduras, young men and women that are members of youth groups called barras, have become victims of stigmatization and criminalization. Barras have been compared to street gangs in Central America, when essentially, they are sports clubs supporting a local football team. However, because of weak institutions to manage conflicts, the natural rivalry that begins amongst fans of opposite teams, has transcended stadiums and has become a serious social problem.  This is aggravated by the fact that football (soccer) is one of the activities in Honduras that is given considerable media attention. In this way, the young members of barras are permanently in the public eye, associated less with the sport and more with the general violence perpetrated in the streets.

As part of the efforts to deepen the work that started with “Sports Clubs for Peace,” on November 2016, Interpeace launched the project “Journalism, youth and sports for peace in Honduras” in alliance with Free Press Unlimited and the Central American digital newspapers El Faro, Nómada, and Plaza Pública. The objective is to contribute to the non-violent transformation of conflicts by changing perceptions and reducing the stigmatization of young people in Honduras.

The project provides training and technical support to the young members of the barras. This helps them develop their own digital media, and become producers and protagonists of alternative narratives that have a positive impact on the media, opinion leaders, politicians, civil society and the private sector. The project aims at establishing channels of communication between the different levels of society to better understand the phenomenon of violence, its causes and contribute to the transformation of the perceptions that the public has about marginalized youth.

Listening to the voice, the human dimension and the story of young people immersed in cycles of violence, is an essential step for building peace in Honduras.

Providing women with tools to improve their capacities as story tellers in contexts where women’s voices are repressed and underrepresented, has proven to be a source of empowerment and resilience. In 2013, our local partner, the Puntland Development Research Center (PDRC) worked with the Nugal Women Journalists (NUWOJO) in the Somali region. The NUWOJO is a group of young women who have completed their training as journalists and formed the organization to advocate for a better female representation in the media sector. Although Puntland has undergone important changes in the past two decades, developing several radio stations, newspapers and television channels, the media sector is the most male-dominated business in Puntland with more than 87% male staff.

Through workshops with NUWOJO, PDRC provided this group of young women with a unique opportunity to get hands-on experience on media production, since most of them had received only theoretical training. The workshop highlighted the role that journalists can play in conflict resolution and the potential to contribute to peacebuilding, emphasizing the importance of providing accurate and unbiased information, building confidence and correcting misconceptions. Moreover, a major component of the workshop was devoted to gender mainstreaming, providing them with an understanding of the media’s crucial role in defining how women are perceived in society.

This workshop was part of Interpeace’s effort to support the development of the media in the Somali region, highlighting the important role of women in peacebuilding, bearing in mind the significance of female presence in mass media. 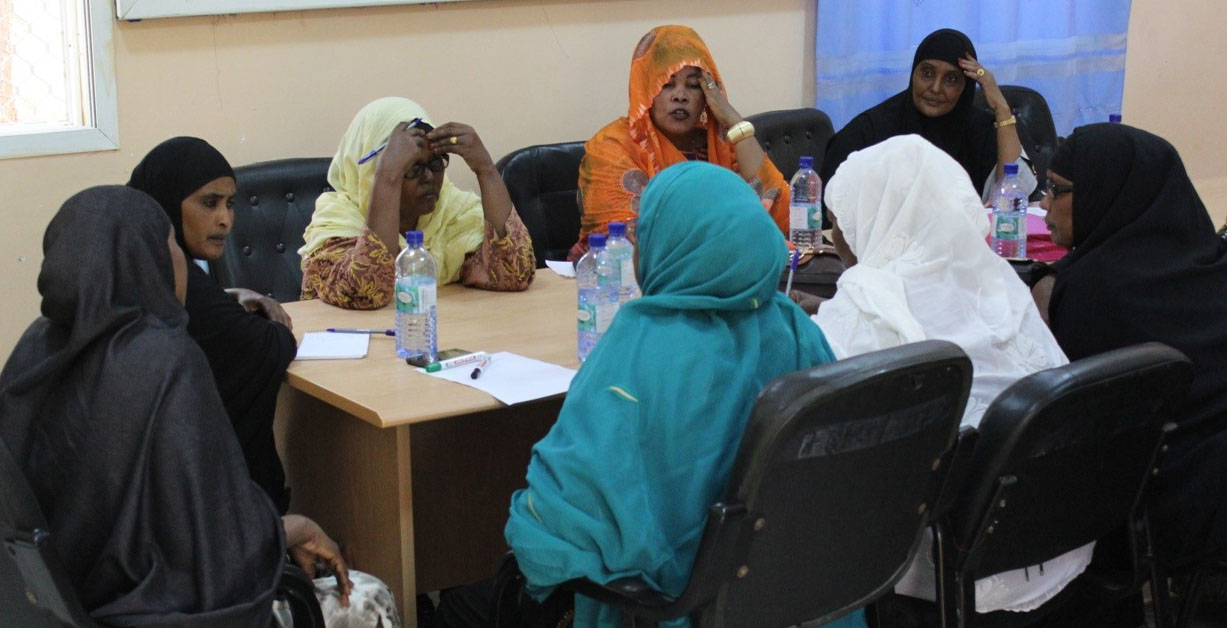 During the 2013 Malian crisis, Interpeace and Fondation Hirondelle, a Swiss organization of journalists and humanitarian aid professionals, joined forces to promote the development of a national scale citizen dialogue. Through the radio programme, Studio Tamani, created by Fondation Hirondelle, a culture of democratic debate began to gradually emerge, where Malians were able to identify the obstacles and priorities for peace. Our local partner Malian Institute of Action Research for Peace (IMRAP), regularly contributes to Studio Tamani’s programming.

Studio Tamani provides a type of journalism that is far more credible in the eyes of the public, because it gives a voice to all Malians. Each day over 1.6 million listeners tune in, to hear the dialogues about conflict resolution, and the results of field research and population analysis on the root causes of conflicts, and opportunities for peace in the country. Therefore, journalists, researchers and communities are working together to expose and inform the major causes of crisis in the region.

Due to the success of this collaboration, Interpeace and Fondation Hirondelle are strengthening their partnership, in order to foster new bridges between journalists, peacebuilders and local actors in other parts of the world. Access to information is an invaluable element that helps societies transition from the use of violence to solve conflicts, to strengthening their already existing capacities to transform conflicts in a peaceful way. As we witnessed through our Frameworks for Assessing Resilience (FAR) programme piloted in Guatemala, Liberia and Timor-Leste, even in the most vulnerable circumstances, there are individuals and communities acting to counter the effects and causes of conflict. We have observed that, while mass media can show the devastating consequences of violence, they can also strive to comprehensively discuss the causes of conflict and offer narratives of peace, that convey these positive and resilient actions.

Striving for visible peace in mass media is not about eliminating narratives of violence and conflict, it’s about making a conscious effort to also include the narratives of hope and actions of peace that counteract violence, therefore illustrating the full picture.  Because even though violent acts occur around the world, there is an even greater number of people working to build and sustain peace. In this sense, peace must also occupy the pages of newspapers, to ensure a balanced portrayal of reality, which includes both stories of violence and stories of peace.