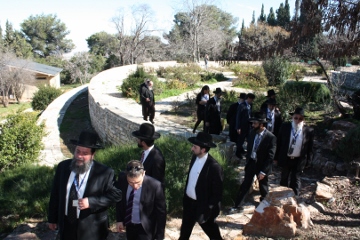 Interpeace’s peacebuilding programme in Israel, Base for Discussion (B4D), engages influential Rabbis to provide them with opportunities to discuss the role of the religious community in the peace process. The rabbis were recently able to participate in two meetings with representatives of the Middle East Peace Process for the United Nations and the European Union.

Visit to the Governing House

The “Committee of Rabbis’” visit to the Government House in Jerusalem was an important step in bringing moderate religious voices to the center stage of the peace process. The excursion enabled the Rabbis to better understand the United Nations’ role and to fully exercise their role as representatives of their community in the peace process.

During the meeting, the Rabbis presented their work to Mr. James Rawley, the current Resident Coordinator of the Office of the UN Special Coordinator for the Middle East Peace Process (UNSCO). Mr. Rawley’s message empowered and gave legitimacy to the Rabbis’ efforts to give a voice and a common vision to the religious issues of the conflict. The Rabbis also met with Mr. Frode Mauring, the Special Representative from UNDP-PAPP.

Representing the Religious Peace Initiative, a number of Rabbis from the group participated in a special meeting with Mr. Andreas Reinicke, the European Union Special Representative to the Middle East Peace Process. The meeting allowed the Rabbis to share their perspective on how to promote an end to the conflict. The Rabbis expressed their deep commitment to being part of the initiative.

The meeting was an important step in initiating the inclusion of moderate religious leaders in future peace agreements. Following the meeting, Mr. Reinicke stated that he understands the importance of a spiritual solution from moderate religious actors in the Middle East.

The meetings of the Rabbis are part of the “Religious Peace Initiative,” a project that supports the traditional religious community in the development of their own vision of a resolution to the Palestinian-Israeli conflict.

B4D’s work with the traditional religious population is part of a wider peacebuilding programme that reaches out to marginalized groups such as the Russian-speaking community and Palestinian-Arab citizens.